Soda Warning Labels Are One Step Closer To Law In California 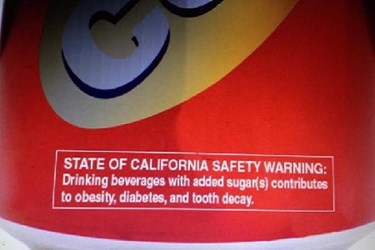 After surviving a narrow vote in state legislature last Thursday, a bill has been passed in California designed to warn consumers about the dangers of drinking soda and other sweetened beverages. If the bill becomes law, California will be the first state to put a warning label on soda, which would read, “STATE OF CALIFORNIA SAFETY WARNING: Drinking beverages with added sugar(s) contributes to obesity, diabetes, and tooth decay.”

Democratic California Senator Bill Monning made the case to fellow senators that sugary drinks are a serious threat to public health, citing numerous studies wherein they were found to be the cause of a variety of ailments, including childhood diabetes. Monning states, “What we’re talking about doing is providing consumers with the right to informed choice. Public right to know.” He continues, urging, “It should be our job as a legislature to make sure that when a product has been proven, conclusively, to contribute to obesity, diabetes, and tooth decay, it should be the right of every consumer to have that warning on the product at the time of purchase.”

After a third vote, the bill received the minimum number necessary for it to be sent on to the assembly, which will then approve the bill before it goes to Governor Jerry Brown’s desk. Although the bill can be viewed somewhat similarly to anti-smoking campaigns, some senators voiced concerns. California Republican Senator Ted Gaines says, “I think there’s a lot of, in my view, unintended consequences of what could happen in the spirit of informing people and educating them about what I think is a huge challenge for our children, families, and adults in California.”

Monning contends that obesity and diabetes are costing the California healthcare system billions. According to a recent UCLA study, the number of people with diabetes tripled between 1980 and 2010, and in California, one third of hospital patients over 35 suffer from the disease. Monning argues, “This epidemic is not only damaging the public’s health, it is costing all Californians.”

The bill is an extension of legislative efforts to improve nutrition throughout California. State lawmakers have already banned Trans Fats in restaurants, required chain restaurants to post calorie information, banned soda from school vending machines, and passed legislation to ensure schools have water fountains on campus. Public health advocates praised the bill, noting that its passage is a major step toward warning people about the harmful effects of consuming liquid sugar.